Thatcher: 'Quite Feminine, but Totally in Control'

It's called Making Thatcher's Britain. Here is its colourful cover-pic: 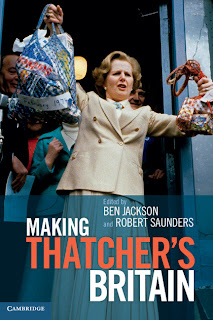 I've got a chapter in the book. It's called ''Just another country?': the Irish question in the Thatcher years'. Have a gander at this excerpt to whet your appetite:


On 15 November, 1985, the Anglo-Irish Agreement was signed by Margaret Thatcher and [Irish Premier] Garret Fitzgerald at Hillsborough Castle, County Down. Thatcher cut an impressive figure. Fitzgerald was carefully spoken, but nowhere near as ‘authoritative and clear spoken’ as his counterpart, an Irish minister admitted: ‘Thatcher is undoubtedly the sharpest thing out, she looked very well (how can she be 60!), quite feminine, but totally in control and totally on the ball.’ This belied the Irish negotiating triumph, however …

None of the chapters are too long, and there's lots of good things to read. So rush off and buy it!
Posted by Marc Mulholland at 02:24