Max Beer, historian and socialist activist, knew Eleanor Marx in London, where he lived for a time after 1894, and they often talked. She told him that her dead father, Karl, "took no interest in Jewish affairs and had no contact with the London Jewry." (Marx, of course, had plenty of the anti-Jewish prejudices of the time, even if he favoured their emancipation and deprecated anti-Semitism. Renewed plebeian Jewish immigration to London only really began in 1881, just a couple of years before Karl died: before that time, 'London Jewry' was a pretty bourgeois culture: impressive in itself, of course, but not Marx's natural kin).

Marx's indifference to the local Jewish community is as one might expect. However, there's a further interesting recollection about his attitude to Charles Bradlaugh, the atheist proselytiser of the age:

Eleanor [Marx] ... told me also that her father hardly ever spoke about religion; neither for nor against. Her mother and elder sister attended sometimes Mr. Bradlaugh’s [atheist] Sunday services, but father dissuaded them from doing so. He told mother if she wanted edification or satisfaction of her metaphysical needs she should find them in the Jewish prophets rather than in Mr. Bradlaugh’s shallow reasoning.

Marx in the 1840s, of course, had abandoned the Young Hegelian focus on critiquing religion as the necessary prerequisite to political modernization.  "The criticism of religion has been essentially completed", he wrote, and now one should seek to transform society so as to do away with the social basis of religious obscurantism:

Religious suffering is, at one and the same time, the expression of real suffering and a protest against real suffering. ... The abolition of religion as the illusory happiness of the people is the demand for their real happiness. To call on them to give up their illusions about their condition is to call on them to give up a condition that requires illusions. The criticism of religion is, therefore, in embryo, the criticism of that vale of tears of which religion is the halo.

With the collapse of the transformative socialist project by the early 1990s, some Marxists made the return journey back to Young Hegelianism. If bourgeois society could not be challenged, religion could. In this 'New Atheism', no doubt, there was a good deal of sublimated revolutionary millenarianism. Still, it's hard not to agree with Marx that there's something a bit unsatisfying about anti-God polemic for its own sake.

Here's a picture of Max Beer. It would be great to see his memoirs re-published: 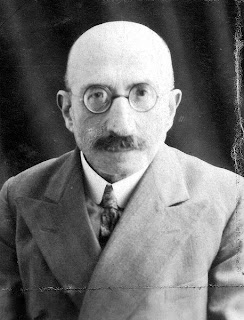 Posted by Marc Mulholland at 02:49