A Cheap Book, and its Cover

Amazon is now offering my book with no less than a 30 percent price reduction. This is all to the good, of course, though I do hope not to be the first author to have a book remaindered before it's even published!

Perhaps now is a good time to explain the image on the book cover. It's a detail from a painting by Franz Schams (1823–1883). Schams was an Austrian genre painter, whose stock in trade was this kind of thing: 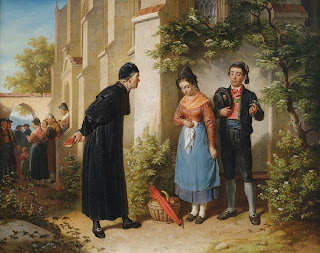 Or there's this, 'A Moonlight serendade': 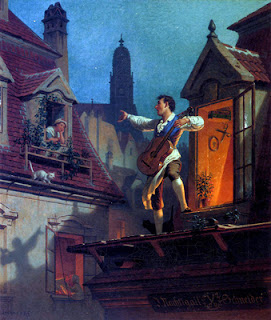 As you can see, it's all quite cutesey. The image I use for the cover is a detail from Schams' 'Students' Guard Room in the Aula of the Universiy of Vienna, 1848'. This is unusual for Schams: a pretty much contemporary painting of political affairs, and from a revolution to boot.

You can't see the whole oil-painting on-line I'm afraid (though there is a black and white reproduction in Eric Hobsbawm’s, Age ofRevolution (1962)). Some idea of the entire scene is apparent from Schams' preparatory cartoon: 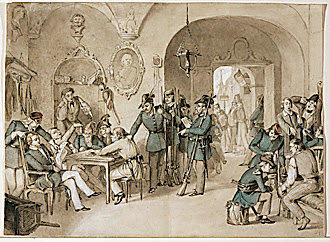 I first came across the painting in the the Vienna History Museum a couple of years ago (I hadn't clocked the reproduction in Hobsbawm's book). A couple of things appealed to me about it. First, the young men depicted - armed students in insurgentVienna - are the very epitome of bourgeois revolutionary liberalism. They're wielding arms, chatting, reading nespapers, debating, and drinking. All good fun!

Artisans and workers were those who generally took to the barricades, rather than the middle class as such, though businessmen might well collude in the street fighting of their employees. Students, however, often established ‘academic legions’ to join the fighting, and they were particularly important - and radical - in Vienna

What I particularly liked about the painting was the detail in the background. Through an open door, we can see two older gentlemen walking by - perhaps they're businessmen. They're out in the street, amidst the  common people. An old women peers at them from a window, while a young buy is trying to sell them a (revolutionary?) publication. They walk beneath a revolutionary liberal tri-colour.

The taller of our two gentlemen is staring fixedly ahead, his face set grimly, while his friend glances at him with a knowing rise of the eyebrows.

This seems to capture the youthful revolutionary enthusiasm of the student bourgeoisie in the foreground, in the back ground an emergent and more tumultuous plebeian radicalism, and on the faces of our two gentlemen a growing distance from the revolution, and a concern about where it might all lead to. In all, I think it summarises the themes of my book nicely. 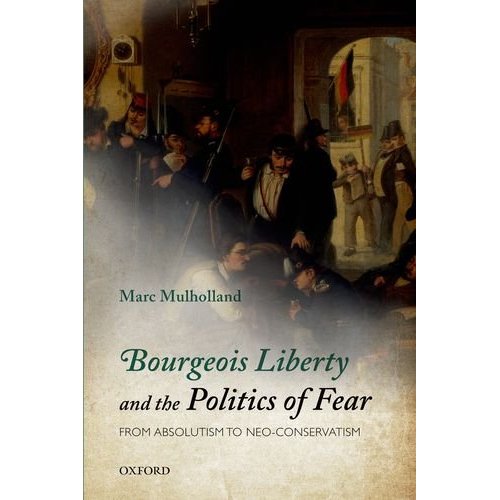 It looks quite dark on screen. I think the hard copy will be a bit brighter.

Posted by Marc Mulholland at 02:23