How Revolutionary were the Bourgeois Revolutions?

Well, I've finished the second recent book other than mine with 'bourgeois' in the title (the other is by Jerrold Seigel). I'm talking about Neil Davidson's massive tome, How Revolutionary were the Bourgeois Revolutions. This must come in at about 300,000 words, so it's no small read (this makes the price it's being sold at all the more impressive. You get a lot of value for your pounds!) 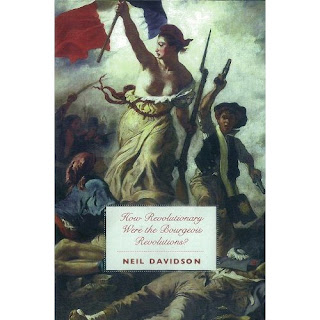 The length is partly explained by Davidson generosity in quoting his large cast of writers quite so exhaustively, sometimes rather exhaustingly. It's true, also, that there are also a good number of excurses that seem pretty tangential to the main theme. One can find, for example, a long digression on Walter Benjamin, which serves to establish the rather startling claim that we can only hope to truly understand the events of history after the “socialist revolution”. (328) Trotsky's theory of 'Uneven and combined development' is lengthily discussed as befits the most "important discovery in C20th Marxism". (286) There's also a lot of returns to the post Jacobite 'revolution from above' in Scotland. These, of course, are especially welcome, as deriving from Davidson's research specialism.

[I'll forgive his claiming James Connolly as a Scot (182), though Connolly's ghost might disagree: "The socialists will never understand why I am here; they will all forget that I am an Irishman".]

As one can tell, this is a book from a politically committed stand-point. Davidson deprecates the “false impartiality and narrow specialization” of academic life. (277) - though he does have time for some “conservative materialist historians” (464), particularly Norman Stone. He chides historians for refusing to draw enlightenment from Lenin's polemical Two Tactics (338). The author implies that he shares, with Marx and Engels, an epistemologically privileged position: because they adopted the standpoint of the proletariat, they understood the bourgeoisie better than the bourgeoisie understood themselves. (125)

More particularly, this book comes from a Leninist perspective, so that poor old Kautsky, as is usual, finds himself roughly handled (220, 237). (Indeed, really quite unfairly - an accusation of dishonestly levelled against Kautsky by Radek, and retailed here, is baseless as far as I can see from Davidson's own copious evidence). Right-thinking Marxists have only “revulsion” for Second International determinism. (521) The Leninist revolutionary party was a great innovation and as necessary now as ever (223, 504, 629). Not least of Stalin's crimes was to adopt the position of the Second International and Menshevism (249).
More particularly again, Davidson identifies with the Trotskyist position. Thus, Popular Frontism was “entirely reactionary” (434).  A rather unexceptional version of Marxist thinking on the 'bourgeois revolution' is summarily dismissed as absurd because of its Stalinist provenance. (254-55) Trotsky's theory of Permanent Revolution gets an extremely thorough, adept, and fascinating treatment.

Most particularly of all, Davidson defends - and spends a considerable amount of effort defending - the political positions associated with the tradition of Tony Cliff's SWP. We can see this in some SWP tics - references to theoretical 'stick-bending', for example, or quoting Shakespeare on the 'flood-tide of human affairs' as a warrant for emancipatory catastrophism (174, 283-4).

A lot of time is spent arguing that the orthodox-Trotskyist desciption of the USSR - as a "degenerated workers' state" (and its command economy off-spring as 'deformed workers' states')  - is incoherent. This is entirely fair no doubt, if of limited significance outside Trotskyist debates. (It seems that we should designate Soviet Union a "degenerated workers state" up to 1928, so there appears to be not so much of a theoretical principle at stake (450))

Whether it's at all useful to consider, as did Tony Cliff, the communist command economies as 'state capitalist' is another matter. Davidson seems to accept the Brenner definition of capitalism as involving a process of competitive accumulation that forces both owners of capital and direct producers to continually drive up productivity (400). This definition appears almost entirely inapplicable to communist command economies. I can't see much use in defining such regimes, even though certainly committed to developmental industrialisation, as capitalist in any form, still less products of bourgeois revolution.

Amidst all of those considerations, and other often brilliant discussions of such themes as Scottish Enlightenment, 'revisionism', the Brenner Debate, and so on, Davidson's actual definition of the 'bourgeois revolution' is rather obscured. He does state it on page 420:

The theory of bourgeois revolution is not … about the origins and development of capitalism as a socioeconomic system but the removal of backward looking threats to its continued existence and the overthrow of restrictions to its further development. The source of these threats and restrictions has, historically, been the pre-capitalist state, whether estates-monarchy, absolutist, or tributary in nature ... .

Broadly speaking, Davidson is a 'consequentialist': revolution need only promote capitalism in the future to be classified as 'bourgeois'. It does not require bourgeois leadership. The political programme of any bourgeois revolution is almost by the way. When revolutionaries talked of
“religious or constitutional liberties” this was only a kind of "false consciousness". (565, 619). In 1640s England, 1790s France, 1860s United States, etc., "leaders, consciously or unconsciously, had to mobilize the masses under ultimately deceptive slogans of universal right" because otherwise workers, peasants etc. would fail to stir themselves simply to swap old feudal oppression for new capitalist exploitation (145):

In no bourgeois revolution did the revolutionaries ever seek to rally popular forces by proclaiming their intention to establish a new form of exploitative society … but did so by variously raising demands for religious freedom, representative democracy, national independence, and, ultimately, socialist reconstruction ... (510)

This last reference to 'socialist reconstruction' is because Davidson sees all communist seizures of power (except Russia 1917) as instances of bourgeois revolution. The last bourgeois revolutions, therefore, were in 1973-5: the Communist coup in Ethiopia, US defeat in Indochina, and decolonisation of the Portuguese Empire. (621)

What's my overall view? I'm extremely impressed by the sheer learning packed into this book, and the sophistication of its argumentation. I've learnt a huge amount from it. It maintains a focused and engaging prose style throughout. It really is an impressive piece of work. I wish I'd read it before I'd finished my own book. My own views, however, are quite different, and remain so. But I've gone on too long, so will only recommend here that you read for yourself.
Posted by Marc Mulholland at 07:00

Email ThisBlogThis!Share to TwitterShare to FacebookShare to Pinterest
Labels: 'bourgeois revolution', How Revolutionary Were the Bourgeois Revolutions?, Neil Davidson