Why did Marx Expect the Workers to be Socialist? 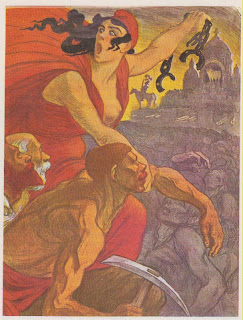 A while ago I wrote an article on why Marx and Engels believed that it was the wage-earning proletariat in particular who, as a social force, would be attracted to the message of socialism.

It's summarised by Marx's introduction to the 1880 programme of the Parti Ouvrier:

The emancipation of the productive class is that of all human beings without distinction of sex or race;

The producers can be free only when they are in possession of the means of production
That there are only two forms under which the means of production can belong to them
This collective appropriation can arise only from the revolutionary action of the productive class – or proletariat - organized in a distinct political party;
Such an organization must be pursued by all the means the proletariat has at its disposal including universal suffrage ...

What this actually meant I discuss in some detail in an article from Critique, here.

You can read the entire article, free of charge, at this website.


Marx argued that humans were necessarily dependent on one another, and upon nature. However, this dependence is felt by the individual as an imposition, and as powerlessness, unless it is voluntarily accepted as a means of self-realisation. For Marx, such voluntarism is only realisable when responsibility for the production of the means of life is assumed collectively. Such a state of affairs is socialism. Objectively, socialism becomes feasible insofar as production is spatially and temporally integrated under the influence of scientific knowledge and organisation. Subjectively, the modern working class becomes available as the agent of socialist transformation. Class consciousness arises from an innate desire to secure one's mode of subsistence. In history, producers have access to the means of subsistence either in a form dependent on the will of others, or independently, in the form of indefeasible property rights. Class consciousness always idealises independent proprietorship. This holds true for proletarians. However, as capitalism makes individual proprietorship impossible, only collective ownership appears to offer secure independence. This definition of Marx's theory brings into focus his examination of the problem of money wages. Income streams derived from the sale of labour power must be insecure if Marx's theory is to be robustly predictive of proletarian socialist preference formation. With this allowance made, Marx's theory is strikingly in accordance with historical data, and evidence gathered by social scientists.


I still think it's a pretty good take on the subject! Feel free to disagree.

Posted by Marc Mulholland at 04:12