I'm pleased to see that Christopher Clark has a new book coming out very soon on the origins of the First World War; The Sleepwalkers: How Europe Went to war in 1914. I've read Clark's books on Kaiser Wilhelm II: A Life in Power (2000, 2009) and Iron Kingdom: The Rise and Downfall of Prussia, 1600-1947 (2007). Both are outstanding books: gripping reads that avoid the sensationalism easily attached to their subjects without sacrificing great story-telling.

I expect more of the same in Sleepwalkers. The blurb suggests that Clark wishes to re-think the historiographical consensus throws almost the entire blame upon German aggression and miscalculation for pitching a basically stable European states system into catastrophic war. Rather, says Clark, Europe was a "multipolar, fractured, multicultural world of clashing ideals, terrorism, militancy and instability ... saddled with a conspicuously ineffectual set of political leaders". He also points out that in its own terms, Gavrilo Princip's assassination of Archduke Franz Ferdinand was staggeringly efficient. It actually succeeded in destroying the Hapsburg Empire and creating a greater Serbia. But at what cost! 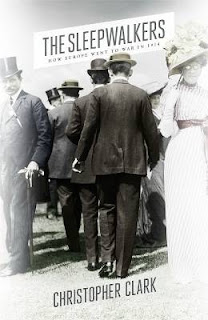 In his biography of Wilhelm II, Clark noted that, following the assassination, "Vienna's demands [for restitution from Serbia] look distinctly undraconian from a contemporary standpoint - they represented considerably less of an incursion upon Berlgrade's sovereign prerogatives than those set before the Serb delegation at Rambouillet in 1999 - and the Serb reply was less accommodating than has often been asserted."[pp. 303-4] It wasn't all blind or cynical lashing out by the Central Powers.

It's this kind of food for thought that puts Clark's newest book top of my end of Summer reading list.
Posted by Marc Mulholland at 03:12