Richard J. Evans has an extremely interesting article in the New Republic. He's not keen on the book he is reviewing - Hitler's Berlin by Thomas Friedrich. Basically, Evans's says, Berlin never was Hitler's city. It was not enthusiastic about Hitler, nor Hitler for it.

When, in July 1932, the Nazis won 37.4 percent of the vote in national Reichstag elections, making them the largest party in the country, Berlin remained resistant. The combined support of the Communists and Social Democrats in the capital was almost double that of the Nazis. In the November 1932 Hitler's party lost two million votes, while in Berlin its support dropped to 721,000 votes. At the same time, the Communists increased their support in the capital to 861,000, with the Social Democrats coming in at 647,000 votes. When Hitler came to power, he laced Berlin with torture and execution chambers to stamp out opposition.

Hitler despised the capital as degenerate and internationalised. He ambition was to re-model it entirely, and re-name it Germania. One can see why he had little compunction in seeing Berlin crushed under the hammer of the Red Army in 1945. He suicide there seems more like an gesture of spite and contempt for the city of his death, than as an act of homage.

Evans' article has a particularly fine comparison of Berlin and Munich in the post-Great War years. Well worth reading 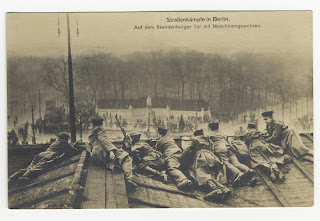 Posted by Marc Mulholland at 04:59