The OTHER new book with 'bourgeois' in its title ... 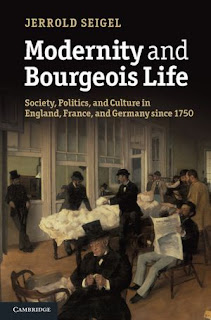 You spend some years writing a book with 'bourgeois' in the title - an offence likely to offend all right-thinking people these days - only to find, just after the text proofs are finalized, that a major new book is published by CUP with 'bourgeois' in the title. I'm speaking, of course, of Jerrold Seigel's major new volume, (fairly) hot off the presses: Modernity and Bourgeois Life: Society, Politics, and Culture in England, France, and Germany since 1750.

Despite the title, Seigel points out that the 'bourgeoisie as a class is not the main character' in his book. [22] Indeed, the bourgeoisie has never ruled: 'There is no instance of modern history of a bourgeois class on a more than local scale ever acting as a unified and independent against social groupings over a significant span of time' [24-5] Modernity, Seigel says, 'has some of its essential roots in the efforts and activities of ... [the] bourgeois', but the bourgeoisie as such never dominated. [6] Indeed, he rejects the notion even of bourgeois "hegemony" in a wider sense. [263]

Seigel's story, therefore, is not one of the rise, fall or any other trajectory of a class, but rather of a "form of life" [6] Seigel is inspired by Georg Simmel who, in The Philosophy of Money (1900), spoke of 'social tools' that connect individuals across extended distances who have no necessary filiation other than a prospect for mutual advantage. For cogent reasons, Seigel re-characterizes this as 'networks of means' made up of "chains of purposive action" [504].  Business people network via the market, administrators via the governed territorial state, professionals via information linkages. [14-5]

This net-worked 'form of life' characterises the bourgeoisie in particular. Wage-workers network too, particularly from the mid-nineteenth-century, but the bourgeoisie are more keyed in. [16, 242]. They have a 'penchant for reaching and striving'. [143] While networks certainly 'alter life for society as a whole' their potential is 'distributed among individuals and groups in accord with their various capacities for directing or drawing on the resources that flow within them' [263] The bourgeoisie are those who benefit most from networked modernity - though presumably there's nothing to stop everyone becoming bourgeois in our wired age (which Seigel discusses in his conclusion). Indeed, the bourgeois category can be extended 'to include everyone involved in market relations.' [309] In the nineteenth-century, even avowedly anti-bourgeois painters and artists were actually striking cases of individual operating in the bourgeois 'form of life': they were amongst the 'most striking examples of the "self-made man"'. [490]

Borrowing Mack Walker's phrase, Seigel argues that the bourgeoisie are "movers and doers", operating 'through participation in extended and distant networks' which break up traditional closed networks. [133] Pre-modern networks existed, of course, but these were 'teleocratic' or 'ordained' (meaning they were networks enclosed by a priori goals, such as Christian salvation), while modern networks are 'autonomous' or 'self constituting', [18] bringing together all sorts of people with various motivations in 'abstract and mediated relationships' [146]

As traditional linkages were de-stabilized in the hundred years or so from 1750, we saw an age of instability. Largely due to Britain's geographical advantages, however, that country benefited from a 'precocious' integration. The French Revolution was partly a result of the strains of modernization, as old closed net-works broke down, though it was by no means a bourgeois revolution. From about 1850, massive integration by railway meant that British forms  spread to France and Germany. [33] However, national particularities remained crucial, and in Germany - with its sonderweg - pregnant with disaster.

There are lots of excellent things in this book. It features, for example, one of the best short discussions of Hegel I've read, not a thinker easy to make sense of. The treatment of Marx, setting him off against Proudhon, is sympathetic yet penetrating on his limitations. Guizot's 'invention' of the notion of the bourgeoisie is laid out with deft sophistication. There's great range here, everything from economic history, sexuality, the Jewish people as nimble and persecuted net-workers, to the bohemian avant-garde.

I was excited to come across this book (though gloomy that it was too late to inform my own). Having read it, I can heartily recommend it as a major and thought-provoking work. It's got quite a different focus from my book, which in contrast is more interested in politics as such, and is necessarily stretched more thinly across a longer stretch of time (Seigel's book doesn't go beyond 1914). There's an awful lot in this book I don't touch on at all (no-one waits with bated breath for my views on art). I think the idea of networks in Seigel's book is exceptionally productive and thought-provoking. My framing of the bourgeoisie is rather different [PDF], it's more antagonistic to other class interests, and by aspects of its definition my bourgeoisie can't encompass all of society. Still, I don't imagine that there's any direct collision between our approaches. Seigel catches profound and fundamental truths.

I'm still glad to have written the book I've written, but equally I envy Jerrold Seigel's great achievement. It's a wonderful book. Go and buy it!

You can read an interview with the author here.

Posted by Marc Mulholland at 03:13