There's a striking oddity about the historiography of pre-1917 European Socialism. Very little of it is Leninist, but almost all of it implicitly agrees with the Communist charge of 'betrayal' laid against the parties of the Second International. This betrayal, it is argued, arose from a 'sudden' eruption of 'social patriotism' that overtook the socialist parties upon the out-break of the Great War. 'Social patriotism' meant a wilingness to defend one's country (or indeed other countries) against attack and invasion. This is presented as a volte face, coming out of the blue, a simple and dramatic capitulation to nationalist fervour. Modern accounts usually point this up as an object lesson in the impractibility of socialist internationalism.

However, the right of national self-defence had always been defended by the parties of the Second International. Here's August Bebel, the leader of the German Marxist SPD, in 1913, for example:

Certainly there is in Germany no one who would want to leave his fatherland defenceless against foreign attackers. That applies also to the Social Democratic Party, whose opponents ... have often accused it of lack of patriotism. .. we must for the present still reckon with the possibility of a war of aggression imposed from the outside, specifically from the east. ... If one day such a war were to break out ... it will be a world war which will set our fatherland before the question of "to be or not to be".

In case this comes across as evidence only of Bebel's 'deviation' from orthodoxy, consider this from Frederick Engels writing in 1891:

Now, if the victory of the Russians over Germany means the crushing of socialism in this country, what will be the duty of the German socialists with regard to this eventuality? Should they passively endure the events that are threatening them with extinction, abandon the post they have conquered and for which they are answerable to the world proletariat without putting up a fight? Obviously not. In the interest of the European revolution, they are obliged to defend all the positions that have been won, not to capitulate to the enemy from without any more than to the enemy within; and they cannot accomplish that except by fighting Russia and its allies, whoever they may be, to the bitter end. If the French republic placed itself at the service of His Majesty the Tsar, Autocrat of all the Russias, the German socialists would fight it with regret, but they would fight it all the same. The French republic may represent vis-à-vis the German empire the bourgeois revolution. But vis-à-vis the republic of the Constanses, the Rouviers and even the Clemenceaus, especially vis-à-vis the republic that is working for the Russian Tsar, German socialism represents the proletarian revolution. [Underline mine].

Perhaps this pre-war sentiment was a German deviation. But consider the resolution on war passed at the November 1906 conference of the French socialist party, the SFIO, which "affirmed that the proletariat would defend the nation from unprovoked attacks", as Harvey Goldberg paraphrases it.

The problem of 1914 was that virtually every belligerant country could plausibly claim to be fighting a war of defence: this was inherent in the system of alliances, and the percieved military necessity of attack as the best form of defence. Every country necessarily threatened its neighbours. Here's an illustration. 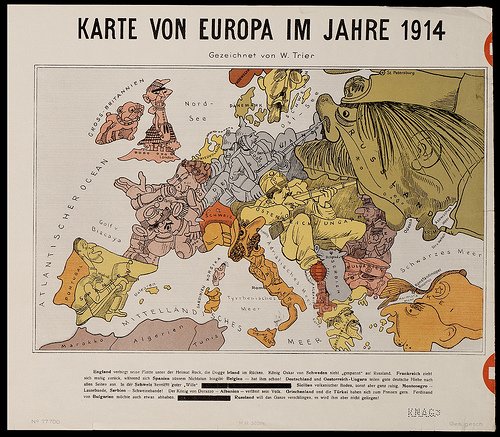 Lenin, in fact, had to come up with a new theory to explain why the right of national-defence for 'bourgeois' countries no longer applied: this was the rationale of his theory of 'Imperialism' as the 'latest stage' of Capitalism. I discuss this in my book, Bourgeois Liberty and the Politics of Fear.

Many socialists adapted themselves to collaboration with reaction and militarism in their support for their war-time governments. But many more tried to maintain their independence and principles. The collapse of the second International, as so much in history, was more tragedy than crime.

Posted by Marc Mulholland at 02:55